JOHANNESBURG- (CAJ News) – A spate of resignations and dismissals is on the cards at MTN as the drama unfolds at the continent’s biggest mobile network operator reeling from a hefty fine imposed in Nigeria.

Last weekend, the turmoil claimed its first casualty in Group President and Chief Executive Officer, Sifiso Dabengwa, who took full responsibility of the crisis and tendered his resignation.

MTN Nigeria CEO, Michael Ikpoki, has meanwhile clung on to his job but information suggests his days are numbered.

The Public Investment Corporation (PIC), the biggest shareholder at the mobile operator, has not minced its words on the problems that have culminated in the Nigeria Communications Commission slapping MTN Nigeria
with a N1,04 trillion (US$5,2 billion).

The company has to pay on Monday.

“Whilst the PIC acknowledges that Mr Dabengwa’s resignation is the noble thing to do in the current circumstances, the PIC is of the view that a lot more people need to take collective responsibility for the fine that was imposed on MTN Nigeria for alleged failure to comply with regulatory requirements in that country,” the corporation said.

While impeccable sources suggested Ikpoki and some senior management were next out of the company, he declined to comment, while Group spokesman, Chris Maroleng, was non-committal.

However, prominent technology expert and World Wide Worx Managing Director, Arthur Goldstuck, said he would be surprised if Ikpoki did not resign following Dabengwa’s exit.

“The biggest surprise of all would be if the MTN Nigeria CEO does not follow Dabengwa out of the company. One would have expected that to be the first casualty in what amounts to a corporate calamity,” said Goldstuck.

His comments came in the wake of reports a restructuring exercise was on the cards to replenish the company’s image after weeks of negative publicity.

“A reshuffle is not enough. MTN clearly has needed a restructure for some time. In its last annual report, it acknowledged that its corporate reputation has come under scrutiny with regard to certain corporate
governance practices and admitted that there were ‘gaps in our governance practices’. Given this knowledge, dating back well over six months, it is inexcusable that the group still conducts itself in a way that compromises its reputation,” Goldstuck said.

He pointed out there was demand from various stakeholders – possibly including the regulator and investors – that heads must roll at the highest level for such a gross oversight to allow more than 5 million of unregistered subscribers on the MTN network.

“It reveals both that the CEO (Dabengwa) was unable to address these governance gaps, and that executive management was unwilling or unable to cooperate in driving forward a strategy to address the gaps.

“While I would not suggest wholesale firing, it is obvious that wholesale restructuring is needed. The company is in desperate need of a fresh, outside perspective on both its corporate governance and its corporate culture. Its history suggests it won’t admit to this need but, for it to continue thriving, it must become a little humble. However, it is very likely that the departure of Debengwa marks the beginning of MTN’s corporate soul-searching” Goldstuck said.

In the wake of Dabengwa’s resignation, former CEO, Phuthuma Nhleko, has returned to the helm of the mobile operator.

With the PIC demanding an “immediate” resolution to the crisis, Nhleko has been in Nigeria as part of continued efforts to appeal for leniency from NCC.

While Nhleko has been in Lagos, impeccable sources also hinted the ongoing negotiations have also drawn the attention of Nigerian President Muhammadu Buhari and his South African counterpart, Jacob Zuma as well as his Deputy, Cyril Ramaphosa.

It remains to be seen if diplomacy can save MTN from its woes in the West African country.

“The names of those included in the (new Nigerian) government have now been released, and portfolios announced. So, if there are to be high-level diplomatic negotiations on MTN and other South African business interests in Nigeria, South African government officials know whom to turn to,” said Liesl Louw-Vaudran, a consultant with the South African-based Institute for Security Studies.

Adebayo Shittu has been appointed Minister of Communication Technology in Buhari’s long-awaited cabinet. 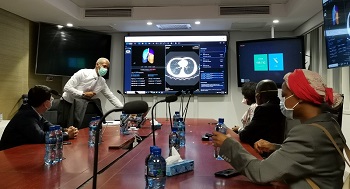 Considering the role of ‘Chiefs’ in business