CAPE TOWN, (CAJ News) – WITH the Nigerian Communications Commission (NCC) unmoved by pleas to reduce a recently-imposed hefty fine and the relations between South Africa and the West African country at an all-time low, MTN has been left short of options in Nigeria where it is increasingly receiving no leniency.

On Tuesday, the NCC, which has been accommodating the errant but seemingly remorseful operator in a series of discussions, toughened its stance insisting the South African-headquartered mobile network pay the landmark US$5,2 billion (about R73.623 billion) penalty imposed for failing to deactivate unregistered 5,1 million subscribers.

The NCC insisted MTN Nigeria was a serial offender, with the multibillion–dollar fine being the second fine in as many months, and had grossly violated the country’s laws that were aimed at fighting crime, especially the terror perpetrated by the notorious Boko Haram sect.

NCC Director of Public Affairs, Tony Ojobo, said the regulatory authority had thus acted in the interest of the public, which he said suffered security challenges from such unregistered subscriber identity module (SIM) cards.

The only relief was that the deadline for the payment of the fine, initially set for Monday, has been reviewed.

NCC said the fine could now be paid until the negotiations were concluded.

“The Commission has acknowledged this (MTN’s pleas) and is looking into their plea without any prejudice to the fine.

“The fine remains but the appeal and other engagements with MTN may affect the payment deadline,” Ojobo insisted.

With the NCC unmoved, MTN was pinning some hopes on the diplomatic discussions said to have been happening behind the scenes to receive some leniency.

Sources informed CAJ News Africa the chances of this were slim owing to the frosty relations between the continent’s two political and economic powerhouses.

“The action against MTN has also once again brought to the fore salient problems between Nigeria and South Africa.

“How this drama will unfold will reveal much about the new government of president Muhammadu Buhari, and about relations between South Africa and Nigeria,” Liesl Louw-Vaudran, a consultant with the Institute for Security Studies, the Pretoria-based think-tank.

She argued the relations between Nigeria and South Africa, were likely to be at play in the wake of the said discussions at diplomatic level.

“The optimism expressed by South African officials belies the reality that 2015 was yet another difficult year for relations between the two countries. This followed the xenophobic attacks in South Africa in April that prompted the temporary recalling of the Nigerian high commissioner in South Africa,” said Louw-Vaudran.

“At the same time, South Africa hit back with an extraordinarily strong statement that dragged a number of old skeletons out of the closet, including the strained relations that followed the death of over 80 South Africans in a church collapse in Lagos at the end of last year,” said Louw-Vaudran.

A source said if the fine stood, it would not be an favorable start to a new era of relations between the two countries.

“I don’t think the South African government can be seen to be protecting MTN, as their actions are indefensible. But the punishment hardly fits the crime and it is there that diplomacy can play a role,” she said.

True to the source’s projections, senior government officials have recently suggested MTN must fend for itself in take full responsibility of the muddle it finds itself in Nigeria.

South African Deputy President, Cyril Ramaphosa, a former MTN board member, told Parliament recently, “We would like our companies to comply with the laws and regulations of countries where they operate.”

Minister in the Presidency Jeff Radebe was quoted as inferring to the stance new Nigeria President Muhammadu Buharis’ government stance was adopting.

“Our understanding is that the President of Nigeria is very serious about fighting corruption in his country,” Radebe told the government’s official news agency.

Newly-appointed executive chairperson Phuthuma Nhleko, has been in Lagos to plea leniency.

Instead, the saga has proven deeper than what Nhleko assumed when he took over from Sifiso Dabengwa.

MTN have been mostly secretive over the nature of discussions.

“With regard to Mr Nhleko, he has been in Nigeria and has travelled there as part of the continued engagements with our operations in that country.

“Our position is that we continue to be engaged with the authority in Nigeria,” said MTN Group spokesman Chris Maroleng.

It remains to be seen what the outcome of the engagements will be but what is become apparent is the continent’s biggest operator is thin on options in Nigeria. 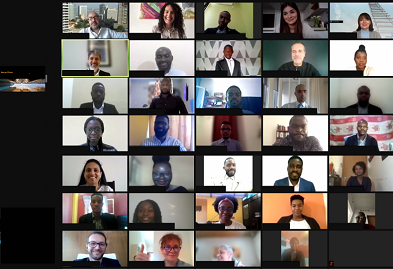