by AKANI CHAUKE
JOHANNESBURG – SOME 97 percent of adult Kenyans with internet access are using some form of online video service, with nearly two-thirds paying to view digital online content.

In Nigeria, the figure is put at around 92 percent while 55 percent of the adults are now paying to watch digital online content.

This is according to the latest annual ViewScape study in Africa, which indicates how the rise of digital platforms is transforming consumers’ viewing habits.

Kenyans spend around six hours and 37 minutes a day consuming video content, with more than half that time (52 percent) spent watching free video.

The study, which surveyed 1 250 people representative of Kenyan adults with internet access, shows that 98 percent of the country’s online adults continue to watch linear broadcast television. One in four download pirated content from the internet and 94 percent watch some digital video on YouTube.

In Nigeria, the study, which surveyed 1 250 people representative of Nigerian adults with Internet access, shows that 99 percent of the country’s online adults continue to watch linear broadcast television. Around 12 percent watch pirated content from the internet and 86 percent watch digital video on YouTube.

“The GfK ViewScape study is one of the first to not only examine broadcast television consumption in Kenya, Nigeria and South Africa, but also to quantify how linear and online forms of content
distribution fit together in the dynamic world of video consumption,” Ballensiefen.

A study for South Africa was released recently, indicating 90 percent of the country’s online adults use at least one online video service and just over half are paying to view digital online content.

The survey of 1 250 adults indicated the average user spends just over seven hours daily consuming video content, with broadcast television accounting for 42 percent of the time South Africans spend in front of a screen.
– CAJ News 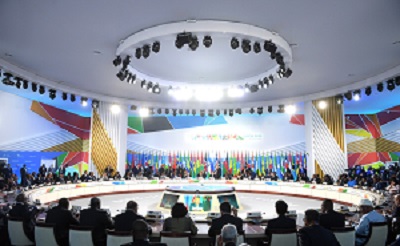